On February 26, 2001 I was at work and received a phone call from Mary 3:00 AM that our son, Jeff was in a serious car accident. Mary was in bed and woken with a knock on our front door. When we arrived at Wake Med Hospital we were told that Jeff had only a 3% brain function and that was the worst case that the doctor has ever seen. Just as we were getting ready for Jeff to leave the nest, we were thrown into taking care of him for the rest of his life. We struggled with many phone calls and internet searches trying to find help for him.

We were blessed in many ways due to our hard work and many prayers that were lifted up for Jeff. Jeff spent only 8 days in ICU and was released to rehab at the hospital. They loved him in the rehab and Jeff worked hard to get out of the hospital. On May 1, 2001 the first words out of Jeff's mouth was "Happy Mother's Day". Jeff spent 3 months at Wake Med Hospital, then 3 months in Asheville where they tried to get him ready to go back to work. We were told that the best place for Jeff was in a group home. God told us that the best place for Jeff was at home where his parents can show him unconditional love.

Mary and I were not comfortable leaving our son in a group home where people are mostly there for the money, not for the love that children need. So we brought Jeff home and worked through the next several years with his anger issues. The anger issues settled down when Jeff realized how much his parents really loved him. So we made him a bachelor 's place to live in our back yard. The hardest thing we have to deal with is having to always be there for him when he wants something. Jeff is now 37 and very dependent on his parents for many things.

Mary and I would not trade any of this because we love him. Just like getting married, for better or worse. Our children fit the same motto. We have seen parents and spouses turn their back on a family member and just walk away instead of showing love and becoming a loving caregiver. There is much help out there and it begins with belonging to a Support Group. 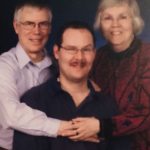 Posted in Living as a Caregiver, Personal Experiences and tagged caregiver